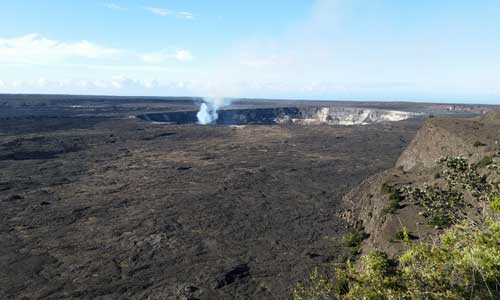 Hike To The Famous Halemaumau Crater

The Halemaumau Crater is the center part of the Kilauea Caldera, an active volcano near Hilo on the Big Island of Hawaii. When I was there in May 2015, I could see LAVA! I would put this on the top of any list of “things to do in Hawaii.”

The Halema’uma’u crater is located in the Hawaii Volcanoes National Park, which is about an hour’s drive from Hilo.

Due to recent eruptions, a good part of the trails near the Halemaumau crater have been closed, but in May 2015, I hiked the Crater Rim Trail from Jaggar Museum (the best place to see the Halemaumau crater, in my opinion) to the Visitor Center and back, and I thought I’d tell you about it.

The Crater Rim Trail: What To Know

This is an easy 2.2 mile day hike (one way) beginning at the Jaggar Museum and ending at the Volcano House and the Visitor Center. It took me about an hour one-way, but I stopped a lot to take pictures.

The trail actually goes all the way around the Kilauea caldera, but most of it has been closed due to the eruptions.

Bring water, sunscreen, and maybe some snacks. You can eat and get coffee at the Volcano House, but it’s pricey.

You’ll also want to bring a camera! There are some gorgeous panorama views of the caldera, not to mention that Halemaumau itself is amazing.

I recommend getting to the Museum just before sunrise, as that’s the best time to see the Halemaumau crater itself.

About The Halemaumau Crater Rim Trail

The trailhead is at the north end of the Jaggar Museum parking lot and marked with a sign.

The trail is paved and mostly flat, and several joggers passed by going either way during this part of the hike. 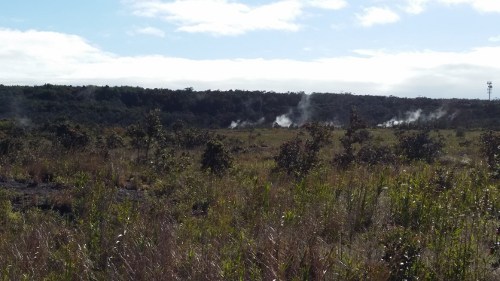 If you stay on the paved part of the trail, you’ll end up at a military camp (one of the joggers going my way who stopped to walk with me and catch her breath said that she and her husband, who is in the military, were staying there), and then the trail continues to the Steam Vents.

Before that, though, you come across the Kilauea Overlook, which is just 3/10 of a mile along the trail, which gives you a nice view of the caldera and the hardened lava flows on the caldera floor.

After you pass that (maybe 2/10 of a mile later), you’ll see a dirt trail leaving the paved path, leading off to the right.

I couldn’t see any sign of it being marked — the ranger at the museum told me about this trail, otherwise I wouldn’t have known about it.

Take that trail, and you’ll find a lovely little path, bordered by post fencing to your right. Just follow the fence!

The trail goes right along the caldera rim here, and there are more fantastic views.

After a while, the trail goes into the forest for about a half mile or so, which I found a nice cool break after walking in the sun for so long.

The path winds along, occasionally going to the caldera rim again, where you can get more nice views of the caldera, the hardened lava, and the Halemaumau crater.

I’m thinking that if you had stayed on the paved path, you would have ended up over at the Steam Vents proper. However, there were lots of steam vents to be seen here on the trail!

There were some markers for other trails going towards the Halemaumau crater after this, but I don’t know if they were open or how safe they were. I just stayed on the main trail.

There were some interesting factoid plaques up about the caldera, and a great place to take photos. You could drive to this point, and there were tourists there taking photos.

Then the trail goes along for about 3/10 of a mile, into the forest again, then you meet up with another junction. Just follow the signs to the Volcano House and Visitor Center.

There’s another juncture, with a sign on your right advertising a self-guided tour. Turn left, and you’ll come out on the roadway next to the Volcano House.

Volcano House has a nice view of the Halemaumau crater, which glows at night, from its picture window in the lobby, as well as some nice exhibits about the history of the volcano. They don’t seem to mind if you walk in and look around.

The Visitor’s Center art gallery across the street is worth seeing, too.

I hope you enjoyed this, and have an opportunity to visit this amazing place. I’m definitely going back!