When I visited Kauai in April 2015, I hiked the Hanakapiai Beach trail, which is the first segment of the famous Kilalau Trail. It’s a fun trail and I wanted to share it with you.

This is a moderately strenuous 2 mile, 1-2 hour (one way) day hike beginning at Ke’e Beach, which is at the western end of the North Shore of Kauai, in the Na Pali Coast State Wilderness Park.

Since you’ll be out a minimum of three hours (more likely 4-5, if you spend time at the beach) you’ll want to bring food (or at least some snacks), sunscreen, and lots of water. Poles might be helpful at the end of this hike, but are optional.

Hanakapiai Beach is a nice place to have lunch, and starting early is probably the best way to do this hike, as the canyons get dark very quickly and you don’t want to be coming down this steep and sometimes muddy trail at night.

Hanakapiai Beach is inaccessible except by helicopter and boat (and sometimes not even then, depending on the weather). Make sure you tell someone where you’re going. I didn’t check on cell phone or GPS signal while I was there, but the trail is very easy to follow during daylight. Your main dangers on this trail are the usual: injury, insect bites, and sunburn.

(I wore my favorite combination insect repellent and sunscreen, Avon Skin So Soft Bug Guard Lotion with SPF 30, and had zero issue with either of the last two, except a bit of sunburn on my shoulders where the cream sweated off)

It often rains in Kauai, and on the day I went the trail was muddy. Wear good hiking boots, and don’t make the hike if it’s raining. Several people I was with were not wearing proper shoes and ended up slipping on the trail, not to mention that there is danger of flash floods in the area.

About The Hanakapiai Beach Trail 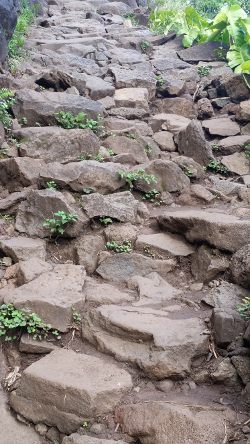 This hike looks deceptively easy at first, but after the first switchback, the trail becomes quite steep, with lots of large rocks, a paving job from the 1930’s, erosion, and tree roots.

This first part was one of the most difficult, especially on the descent when returning.

You won’t get a chance to warm up on the trail here.

But there are some beautiful views on the first half mile of the trail.

Once you hit the 1/2 mile marker, the trail goes down just as steeply for about an eighth of a mile. Take it slowly, and enjoy the gorgeous view.

At about the 5/8 mile mark or so, the trail levels off and there’s a 90 degree turn up and to the right. A nice little waterfall is on your left at the bend, with water running through the trail.

The trail is steep after the bend, but once you get to the top of this bit, there are more spectacular views of the coast. If you turn around, you can see an interesting view of the mountains. There is a gentle slope downward for about 1/10 mile, following the ridge around the mountain, with lots of great views.

After this you descend a steep slope with mud over rock, which is very slippery, although there are more great views. Later on, the trail gets even steeper, and although there are boards across the trail, there was quite a bit of mud, and several people in our group slipped down at this point.

Eventually, the trail flattens out and goes into the underbrush, and it looks a bit like Jurassic Park (which, incidentally, was filmed nearby).

The trees open up to a gorgeous view of the coastline at the 1.5 mile marker. This is a nice place to catch your breath as you work your way down the hill. The trail again descends from there, but not quite as steeply.

Next comes two more streams, the second one much wider than the first, but both very shallow. The trail then makes a gentle climb then down just as gently for about a tenth of a mile, then to some switchbacks, muddy and a bit steep. 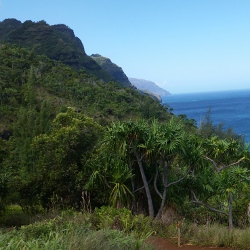 Right before the end of the trail, there’s a river crossing which was about knee deep. This would be a good place to use your poles if you have them.

If you’re alone and/or the water is above your knees, be very cautious and consider waiting until the water recedes. Several hikers have been swept away by flood-waters and killed here in the past.

Once you make it past the river, you’re at Hanakapiai Beach!

They don’t advise swimming in the water as there are rip currents, but there were many people playing in the surf. This is a great place to have a picnic, relax, take your boots off, and prepare to either continue along the trail to the falls and beyond (which I believe requires a permit) or make the hike back to Ke’e Beach.

I liked this hike, and if I come back I’d like to try going at least to the falls next time.