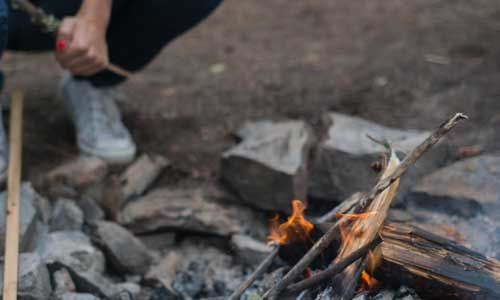 Fire starting can sometimes be an exercise in frustration. The tinder doesn’t light or burns out too fast, the big logs smother the fire before it gets going, or you build a nice “teepee” only to watch it fall apart and flame out.

Have you ever wished you knew how to build a campfire that would light with one match and quickly grow into a blazing, crackling, marshmallow-roasting furnace?

Fire starting doesn’t have to be difficult. Here’s how to do it, quick and easy.

The Secret To Camp Fire Starting 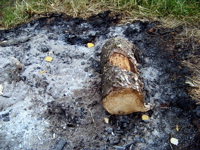 First, rather than starting a campfire in a round “teepee” structure, use a big log as a “wall” to build against (a large rock or fire pit ring also works).

This is a more stable structure that doesn’t collapse or scatter easily.

Also, make sure all of your fuel is very dry. It should go without saying that wet or damp paper and wood don’t burn very well.

Be sure to use plenty of tinder. This is where many people go wrong. 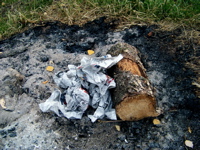 A small pile of paper, leaves, or bark burns out pretty quickly. Make a big pile and you won’t have to do it twice.

Newspaper works well and is cheap. Separate 5 or more individual pages, crumple them up, and pile them closely together in the bed of the fire pit, nestled against the big log.

Next, pile a bunch of kindling over the tinder. Here again, you need to use a lot of kindling so the fire doesn’t burn out too soon. 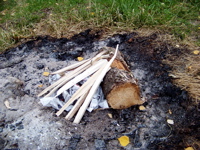 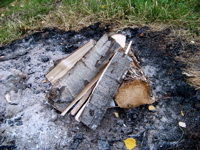 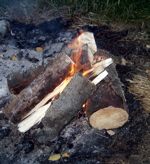 Now you’re ready to light the fire. Starting it is as easy as lighting a match and touching it to your tinder.

You can light it in several places if you want, but it should burn just fine with one light.

Once it’s lit, just sit back and watch it go! Before you know it you’ll be eating scorched marshmallows and blackened hot dogs.

Ah, the joys of camping … now if I could just figure out how to keep the smoke from following me around the campfire …